Thirty-five young people. 16 schools. Eleven mentors. And – crucially – two very cute robots. At the start of July, they all converged upon Bluefruit Software’s Redruth offices, for a week-long Mission to Mars.

I showed up for the final presentation, to give a bit of encouragement and show how Cornwall’s (officially burgeoning) tech community also includes some pretty cool non-technical jobs.

Or so I thought.

Instead, I discovered just what a nerve-shredding experience coding can be. And as I watched a small, determined machine veer perilously close to the edge of an MDF ramp, I – like the students themselves – learned quite a bit about what real-world coding is actually like.

The moment of truth

Mission to Mars is a work experience week organised by Software Cornwall to give the students – all aged between 14 and 16 – hands-on experience of coding for hardware, using C and C++.

Assigned to small teams, they navigate their way through a series of twelve technical challenges – or stories – earning credits to spend on hardware for their mini “Mars rover” robot.

And the whole week’s work culminates in a final demonstration of their code’s capabilities (difficult stuff, like seeking out a light source while avoiding obstacles and reversing away from sudden drops) all in front a watching group of “investors” (that’s us).

Oh, and just the small matter of standing up in front of those 60 strangers, and talking about the experience.

As events unfolded, and the robots “Bert” and “Ernie” did battle with the wooden Martian landscape, five things became abundantly clear…

Lesson one: resilience is essential

Some of the robots worked well, completed their tasks, and avoided the inherent dangers of Mars.

Others – spectacularly – did not.

And after one particularly epic crash-and-burn left its team looking a little crestfallen and confused, one local programmer raised her hand and offered the group some sage words:

Programming, everyone seemed to agree, is summed up in the simple phrase “it was working earlier”. The system that suddenly – maddeningly – sends you back to the drawing board, just when the client is watching.

It happens. So dust yourself off, don’t take it to heart, and try again.

Irrespective of the prior coding experience of the individual students, the teams who worked together best seemed to get the most from the experience.

Some groups talked with enthusiasm about taking a team approach, or reported back on trying pair programming, and how they’d been able to spot each other’s mistakes as they went along.

(Conspicuously, they seemed to get better results – and have more fun – than teams which had been content to leave much of the programming to one “expert” within the group.)

Lesson three: think about the future

Repeatedly, the teams shared how important it had been to write their code clearly, with obvious names and descriptions to make it easy to pick up later, and help with collaboration.

The experienced programmers in the room agreed. Sometimes, a device might work well for ten years or more before developing a fault. How easy would it be for you to remember – or another developer to understand – how your code works, and devise a fix?

Eddy Search of Goonhilly Earth Station gave a practical example: Merlin, the 32-metre antenna that could receive signals from the European Space Agency’s real-life Mars mission “Orion”, runs on technology so old that today’s engineers are only able to use it because of the careful notes of their predecessors.

(Amazingly, the dish is aligned to its signal using essentially the same voltage comparison principles the students had used to make their robots seek out light sources.)

Forget your stereotypical, geeky male programmer. The Mission to Mars teams had a healthy contingent of female geeks, too. And they were active, knowledgeable, confident – and every bit as able to lead as the boys. Obviously.

(So much so, in fact, it seems strange to even make the observation.)

No distinction was made, or mentioned, at all. Which, of course, is just how it should be.

On this evidence, at least, tomorrow’s tech industry will be a place where women and men code – and manage – side by side, on absolutely equal terms.

The young people travelled to the event from 16 different schools and colleges – some as far as 60 miles away – all under their own steam. Watching their presentations, it’s easy to see why.

Repeatedly, teams gave feedback along the lines of: “At school, our computer lessons are all on the screen. This is the first time we’ve used coding with hardware.”

And the impact was clear. Even students who were clearly uncomfortable in front of a large audience quickly warmed to their subject, and became animated, engaging speakers when talking about their challenges, frustrations or triumphs in combing code for hidden bugs, and coaxing the robot to complete the “story”.

Even when the demonstrations didn’t go to plan, the results were fun – with the robot taking take on a life of its own, or seizing its moment to bid for freedom. And the experienced coders quick to applaud even the perceived “failures”, and ask the students: “what did you learn”?

As one member of Team Hello Mars – watching her robot “Bert” seek out a light source – put it:

As Cornwall’s tech sector continues to grow (and with Newquay set to become Cornwall’s very own Mos Eisley), the young people at the Mission to Mars have every chance of landing a job coding – maybe even developing robots for real – or in a related field (you know, like tech copywriting).

And with the county’s new digital academy about to open its doors, and the Crowdfunder appeal to fund more Mission to Mars events having smashed its target, it’s good to hear that more young people will get the opportunity to try real coding, in a real work environment.

I’m certainly grateful to Software Cornwall for the invite – and to the young people themselves, for sharing so much of what they’d learned. I felt privileged to be part of it.

And if you’re a B2B tech company after good content… 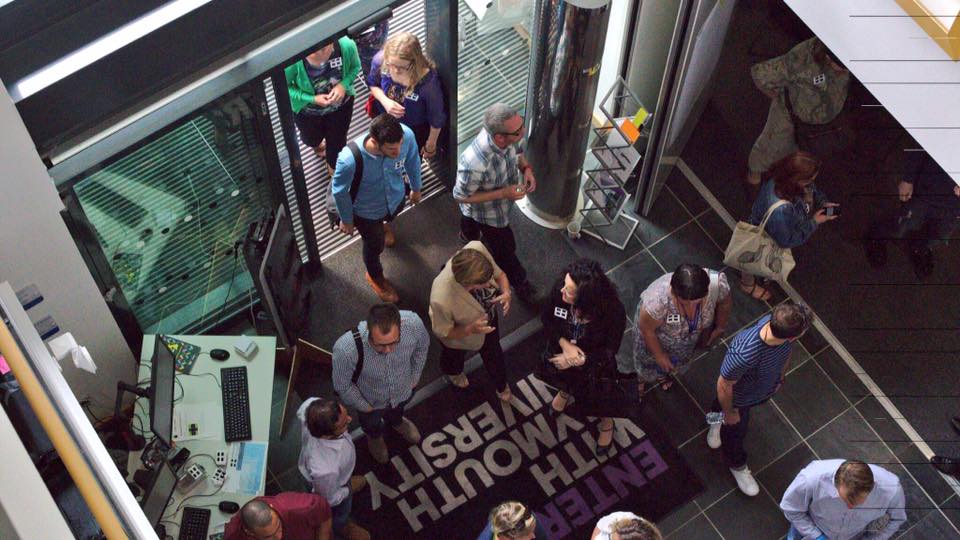 Cornwall's tech sector has long been fragmented and invisible. Now, thanks to the efforts of Software Cornwall, it seems to be gathering ground.