Last night I happened to be awake and glancing at Twitter in the early hours, when I saw this tweet from Tim O’Reilly, boss of the legendary O’Reilly publishing empire and world-class alpha geek. 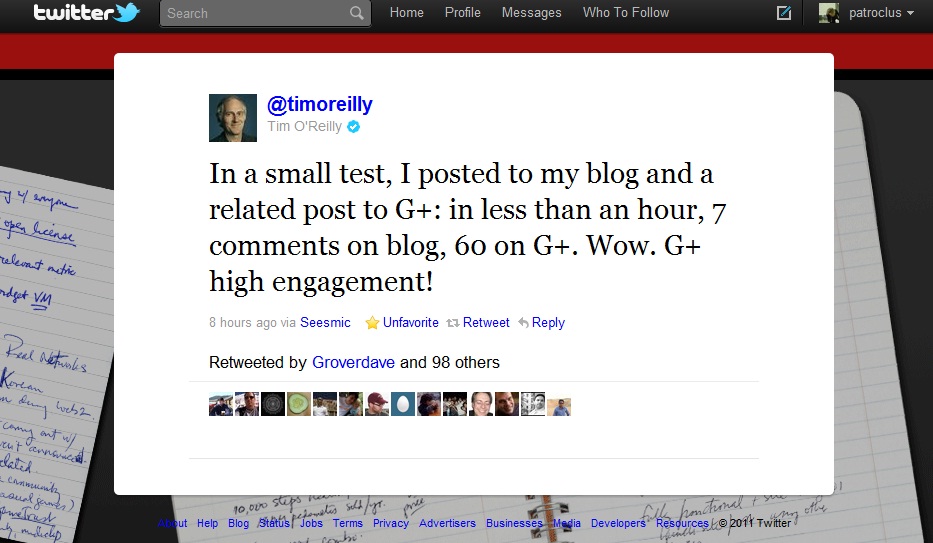 His tweet crystallised in my mind something I’ve been wondering for a while. Are blogs still really ‘social’ media, or do they play a different role in the media firmament now?

When I started blogging, an eternity ago in 2002, blogs were just about the only way a non-technical person could get their thoughts out on to the web.

(Yes, there were forums too, and bulletin boards, and virtual worlds, but blogs were special because it was your place and – by and large – your rules.)

Regular bloggers built up a loyal following – whether it was tens of people or tens of thousands of people. Those fans would visit the blog once, twice, three or more times a day, firstly to read any new posts, and secondly to read the comments, add their own, and chat with other commenters.

Blogging was a very social pursuit. People made friends – and enemies – in blog comment boxes. It’s how I met my husband, and it doesn’t get much more social than that.

The web’s social centres have moved

But since then, the online world has become more fragmented. The social centres of the internet have moved. People make friends – and enemies – on Twitter and Facebook. Professional connections are forged on LinkedIn and Google+. Communities of interest form in Flickr and Tumblr. Blogs are no longer the social places they once were.

That doesn’t mean blogs are forgotten, or irrelevant, or old hat. Just that a new layer of truly ‘social’ media has formed on top of them, one that’s better at getting people together to chat and share information.

From ‘social media’ to ‘media’

And increasingly, people will say what they think about your post on those other platforms, and not on your blog. They will probably include a link to your post, but the comment will stay on Twitter, or Facebook – and that’s where the conversation around it will happen.

Blogs are changing from being ‘social media’ to just ‘media’.

Maybe the transition isn’t complete yet. Plenty of blog posts still attract comments, sometimes hundreds of them. Plenty of blogs still have loyal visitors. But as social media platforms like Facebook, Twitter and Google+ become the primary places to have conversations online, I predict we’ll see far fewer people commenting and interacting on individual blogs.

I just hope it won’t put people off blogging – it’s still the best medium I know for articulating and publishing your thoughts (not to mention keeping your website interesting), and therefore still as valuable as it ever was.

Reading science: how to create B2B content that works for your reader’s brain

Science says your audience isn't reading as much of your content as you might think. Here’s some advice on how to change that.