Most people, when they come across the fact that Google Maps has planted a phantom town called Argleton in the middle of some fields in Lancashire, would probably just think “huh, weird” and move on.

Not many would be moved to write a book about it. Still fewer would strive to get that book into print by crowdfunding enough cash to produce paperback and hardback copies.

And I’m pretty sure there’s only one person in Britain today with the requisite skill and dedication not only to write such a book and crowdsource funding for it, but also to bind every one of the 113 50 hardback copies by hand to a professional standard, meticulously wrap every copy in tissue paper and pages from an atlas, package them into boxes, and send them out to each of the project’s 150 supporters. 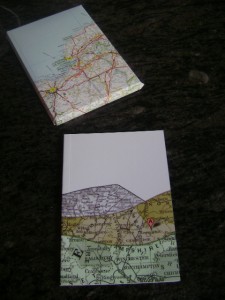 That person is Suw Charman-Anderson, internet geek and blogger at chocolateandvodka.com. The book – or rather novelette, it took me around an hour to read it – is called Argleton: a Story of Maps, Maths and Motorways. It follows two PhD students who set out to investigate why Google Maps (fictionalised as GeoMaps) persists in showing the non-existent town of Argleton in the middle of a field.

Arriving at the spot, the pair discover a WiFi signal that sets them off on a strange and risky trail, involving coded messages hidden in SSID handles, more phantom towns and a goodly amount of maths, geometry, cryptic warnings and internet memes. There’s even a bit of a love story thrown in.

The gorgeousness of the packaging, printing and binding immediately made me think that something in this project would have to give, and since Suw hasn’t – as far as I know – had any fiction published before, I (rudely) assumed it would be the quality of the writing.

But Argleton is far more accomplished than I expected, nipping along at an engaging pace and weaving all kinds of geeky concepts – memes, trolls, copyright traps, smartphone apps, geolocation, data mashups, crowdsourcing, alternate reality games – into an absorbing and satisfying story that really made me feel as if I was there with the main characters.

It’s difficult to say very much about the story without giving away the plot, but Kit Williams fans will definitely find lots to enjoy, as will anyone who takes an interest in the increasingly porous interface between the real and the virtual.

Argleton is currently only available to the 150 people who contributed financially to it through the crowdfunding site Kickstarter. But according to Suw it will soon be available to download as a PDF from her blog, and I can thoroughly recommend it.

I was excited by this project from the very start, and my excitement (and cash) has been more than rewarded with a gorgeous artefact that combines a whole bunch of current online and offline trends – crowdfunding, self-publishing, ARGs, DIY culture, handmade culture – into a beautiful and satisfying end product.

Congratulations to Suw on a really wonderful piece of work, and I’m really looking forward to seeing what she comes up with next.