There’s an old saying in the world of advertising: throw someone one ball, and they’ll probably catch it; throw them half a dozen, and they’ll drop the lot. (Well, it’s something like that, anyway.)

What it means is: you’re better off making one sales point really well, then trying to tell your customer everything at once, and confusing them.

It’s something I see a lot when I’m briefed on ad copy – and it’s understandable: you’ve paid for this space, after all, so why not get as much value as you can by delivering all your sales messages?

Or, to put it another way: the reader might not be interested in that USP, so let’s include a bunch of others, and hopefully they’ll see something that appeals.

Except, of course, they don’t see one that appeals, because they don’t see or remember anything. Because in dividing your efforts, you’ve compromised the way you tell the message, and nothing’s clear or memorable. You’ve aimed for everything, and hit nothing.

It’s not just true for advertising, of course. I’ve lost count of the times a two-minute video script has swollen to three, four or five because the client keeps thinking of one more thing they absolutely need to say. Or a web pages with such a dizzying number of calls to action that the user has no clue what they should do next.

The real art of B2B copywriting – the bit that separates the wannabes from the pros – is having the courage, and the discipline, to leave things out. Even really good things. Because the job we’re doing today is conveying this message, in the best way possible.

In the end, simplicity wins. So work out the one thing you most need your audience to understand, at that precise moment. Then say that, as clearly as you can.

(Ideally, with a bit of style.)

In this video snippet from a presentation in Cornwall last year, I illustrate that point, by referring to a VW ad that’s stayed with me for years.

Here’s what I say (hopefully, clearly) in the video:

But it’s really hard to remember that stuff, because when you say everything, the results are so confused. And suddenly you’ve lost all your impact, and it’s just a mishmash… because there’s too much information.

What you need to do is think about the one thing your customer needs to hear at that moment.

What is the one reason that they should buy from you, and not your competitor?

What is the one thing you can offer them that will change their mind and make them go, “Yeah, OK, I’m listening now”?

Now, make that one point.

Companies like VW do it really well. VW adverts are almost always all about saying one thing.

Do you remember the one with the guy who’s bringing up his daughter? They bring home the daughter in the cot, and they’re caring for her at every stage of life: she’s running around the house he puts his hand over the corner of the table so she doesn’t bang her head, and she gets older and and he’s waiting for her outside the nightclub so that she can get home safely. At every stage, he’s keeping her safe.

So she passes her driving test and… he gives her the keys to a Volkswagen Polo.

It’s THAT safe. You can entrust the most precious thing in your life to this car.

It’s one idea. The equivalent of what a lot of people would like to say is, “Get a Volkswagen Polo — it’s really safe AND it’s got four wheels AND it’s got some headlights AND wing mirrors and things, AND it’s fast and it’s nippy — but not too fast because that wouldn’t be safe.” …Because they want to be all things to all people.

But VW sat down and asked: “Why does somebody buy a Volkswagen Polo? Because the perception — rightly or wrongly — is, as small cars go, it’s as safe as you can get. Now let’s make an ad about that thing.”

And they convey that one message, clearly, in a powerful and stylish way. That’s just one example from advertising, but it holds true for anything you might right.

Check out the next video, and find out when you should use plain English. 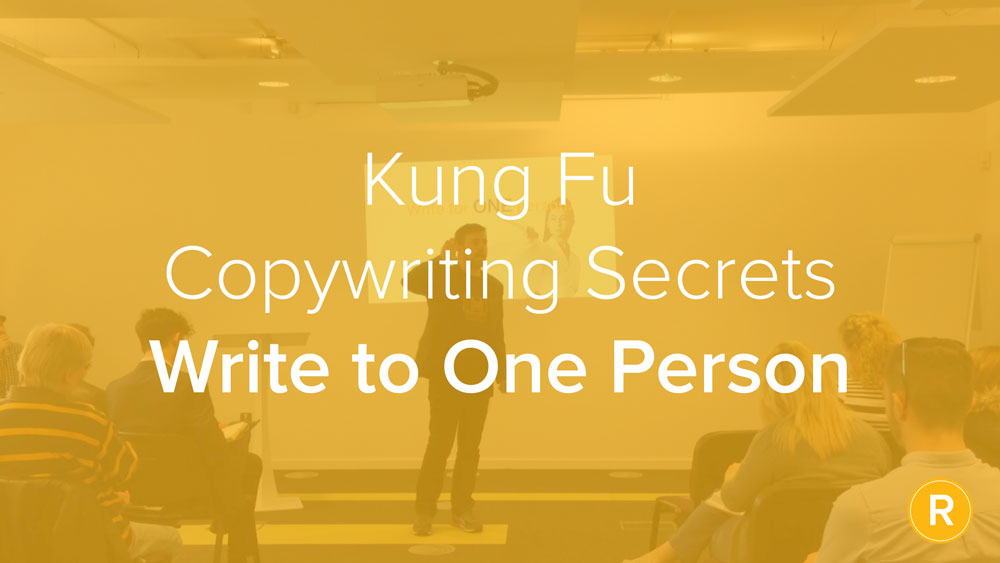 Kung Fu Secrets of B2B Copywriting: Write to One Person

What can a B2B copywriter learn from Simon Mayo’s radio show? Watch this short presentation and find out…