Just so we’re clear, I’m talking here about jargon – the shorthand used within industries or professions to express common but complex ideas. I’m not talking about buzzwords – the pointless neologisms and infuriating noun-used-as-verb linguistic atrocities that, at best, confuse and irritate, and, at worst, alert the reader to the fact that you’re a dribbling imbecile who couldn’t be trusted to run a bath, let alone a data centre migration. Buzzwords are not key. They aren’t impactful. And they are never, ever a paradigm shift. No, we’re definitely not talking about that sort of thing in this post. We’d be here forever.

Buzzwords are the enemy of good B2B copy. But jargon – used appropriately – can be its friend. Just look at that last paragraph. You see that word, ‘migration’? That’s jargon. In data centres, it’s a commonly used term and its meaning is well understood. Anywhere else (except in the analysis of global population movements), it’s just a pretentious way of saying ‘moving from that thing to this other thing’.

If I suggested to someone that they should ‘migrate’ from one type of caffeinated beverage to another, they’d think I was mad. If I went on to explain that their new drink would be far more ‘scalable’ than their current choice, they’d probably call Social Services.

But suggest to a data centre architect that ‘migrating’ to servers that are more ‘scalable’ could be a good idea, and they’ll know exactly what you mean, because these are the words they use themselves to describe the things you’re writing about.

Of course, some jargon is designed to confuse outsiders; to keep the club exclusive. The notoriously insular and secretive worlds of finance and government defend their exclusivity with jargon so pathologically dense that it renders almost every piece of writing utterly incomprehensible without a Master’s degree in Applied Bullshit.

And that’s the point. Good writing (and especially good marketing writing) must have clarity. When jargon’s used properly it doesn’t flummox or annoy people – it brings clarity.

Plenty of writers will tell you never to use jargon. And certainly in B2C marketing it can be wildly inappropriate and leave you open to ridicule. As I shall now demonstrate.

In a current TV ad for yoghurt, for example, we’re informed that this delicious product will “accelerate intestinal transit” (jargon-free version: it makes you poo). Thanks for that, Gok.

But in the murky exhilarating world of B2B – and enterprise tech in particular – there’s a whole world of language that’s widely understood and used every day. This jargon is an industry shorthand. It’s used to communicate extremely complex ideas in a simple, concise way. It *is* clarity.

A show of confidence

Appropriate use of jargon shows confidence in your handling of the subject matter – and instils confidence in a professional audience that you know what you’re talking about. Reading good B2B copy should feel like having a conversation with one of your peers. A properly judged level of jargon can be an important part of creating that rapport with the reader.

Use too little jargon, and you can come across as oversimplifying complex things. But use too much, and readers will question whether you really understand what you’re writing about or if you’re just mindlessly using a checklist of words as a way of showing you’re in their club. (Spoiler alert: you’re not.)

The answer? Know your audience

This is where your buyer personas come in. If you know what jargon your audience uses, you’ll know if you’re talking to them in their own language. And you’ll have a pretty good idea when it’s too little, and when it’s too much.

Author’s note: No buzzwords were leveraged in the ideation of this collateral.

We have a whole team of copywriters who know how to write B2B content that converts. Get in touch today. 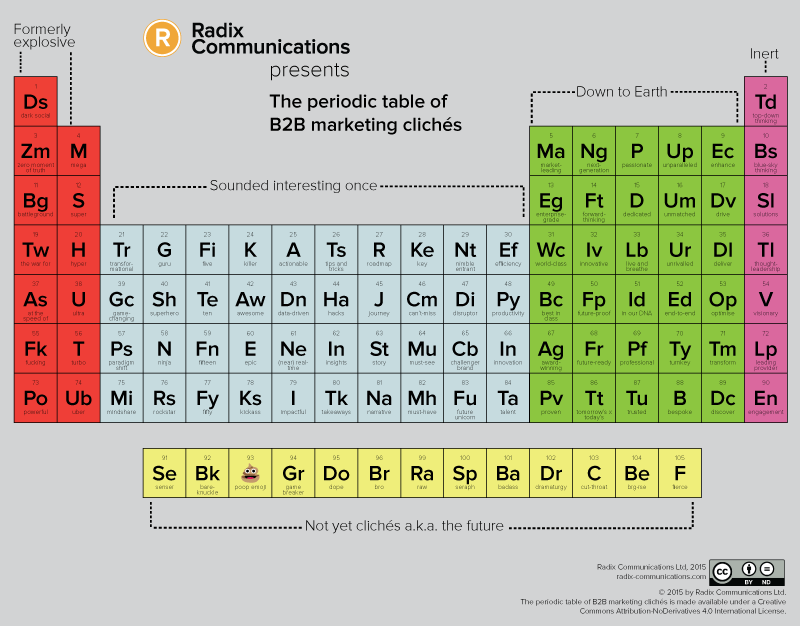 B2B copy has always been plagued with clichés. But now there’s a whole new crop of over-used phrases to scoff at. We’ve collected the whole lot into one handy table. 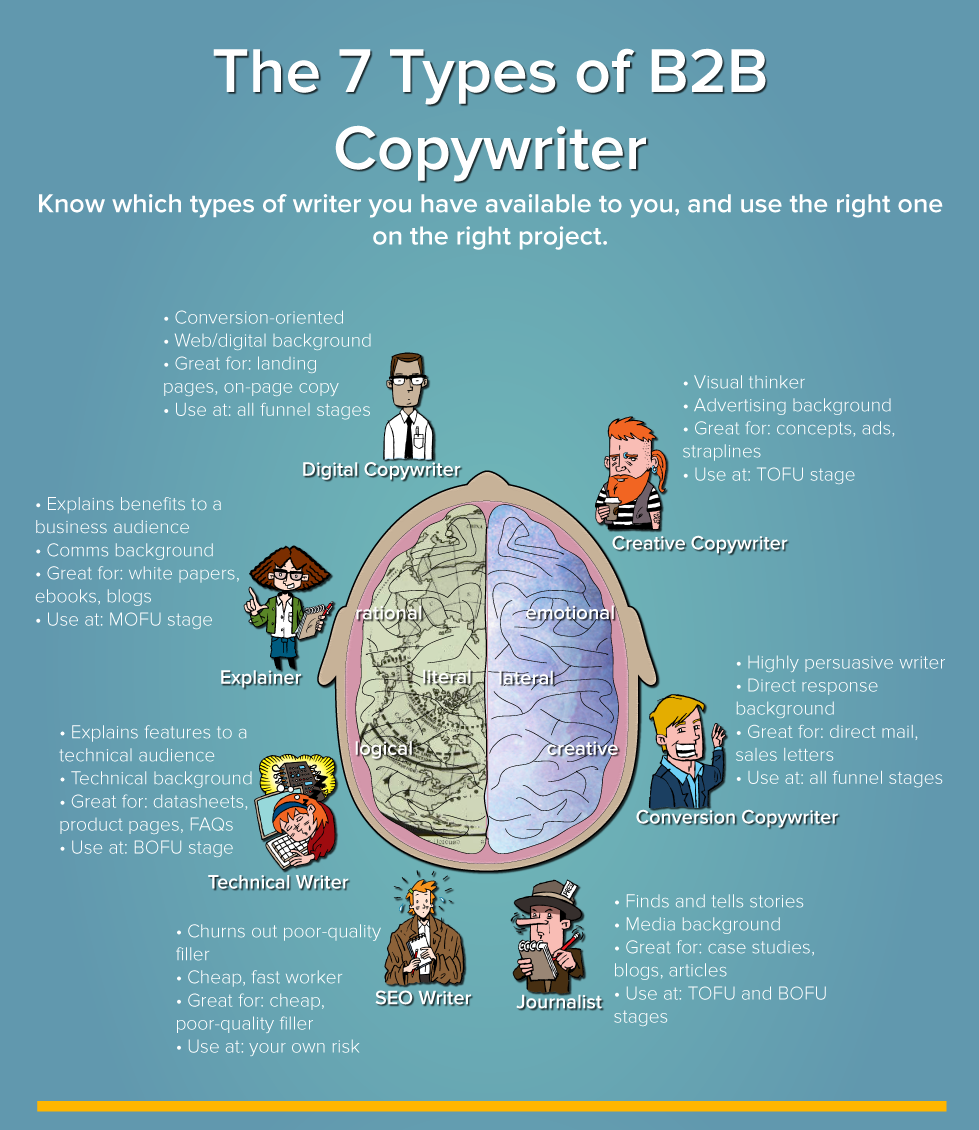 Infographic: The 7 Types of B2B Copywriter – and How to Use Them

Not every B2B copywriter is good at the same things. This infographic will help you choose the best writer for every campaign.