An odd thing happened the other week, which for me threw a whole new light on the relationship between owned media and earned media.

“Spirent has issued a free, new 28-page ebook on testing navigation and positioning of drones & UAVs,” announced the tweet, with a link.

This got my attention, because a) Spirent is one of our clients here at Radix, and b) I happened to have written the ebook in question.

At first I assumed our client was running a promotion with GPS World, since the publication’s audience of satellite navigation and positioning engineers is also Spirent’s core market.

But on following the link, I realised this wasn’t actually the case. Rather, what seemed to have happened (later confirmed by Spirent) was that a GPS World reporter had noticed Spirent publishing the ebook, and chosen to write it up for the site.

The result is a bona fide news story, rather than a third-party promotion: 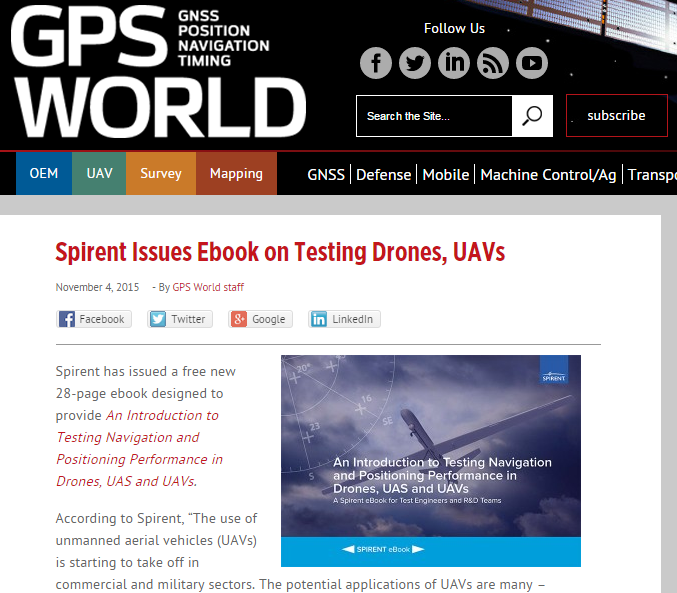 The story starts and ends with a link to the landing page to download the ebook, which, our friends at Spirent have told us, has resulted in a very pleasing number of downloads.

A great – and totally unexpected – result for Spirent, and, I must say, quite a gratifying one for me, especially when I saw my lovingly crafted copy quoted back at me in the article.

It’s not every day a piece of B2B marketing content gets covered in the relevant trade media as actual news. In the past four years I’ve written reams of content for clients, but as far as I’m aware, only three pieces have ever been covered by the media.

Apart from the Spirent ebook, I’ve also had:

1. A critique of an ebook I wrote for Canonical (the company behind the Ubuntu open source operating system) in 2011, in IT trade publication The VAR Guy. 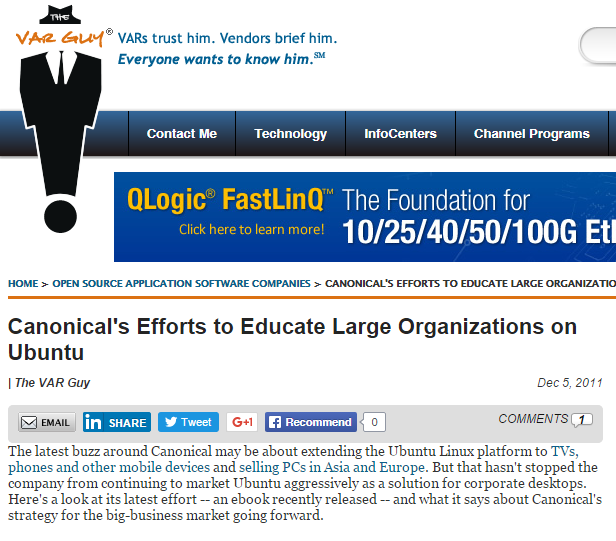 It was massively disconcerting to see the ebook deconstructed by a mysterious stranger, but quite reassuring that the review was largely positive.

2. A passing link to an ebook I wrote this year for Xerox, working with Xerox’s content marketing agency, Velocity Partners. (In fact, the Canonical ebook was a project for Velocity, too. Velocity are in a league of their own when it comes to content creation, and I love working on writing projects for them.)

The Xerox piece was singled out in a Contently article about Xerox’s new content-rich website. Blink and you’d miss it, but the third para below has a link to an ebook I wrote about seven cities that are taking an innovative approach to urban mobility:

I’m not entirely sure this last one counts as much as the other two, since Xerox is a client of Contently, making this more of a case study than a piece of independent editorial, plus the audience for it is content marketers interested in Xerox’s content strategy, rather than potential buyers of Xerox transportation technologies.

But taken together, these three examples do imply something quite interesting about the relationship between owned media and earned media – and not one that’s usually considered in studies of how different types of media should interact in a content strategy.

Namely, that if your owned media is good / topical / interesting enough, it can earn you some earned media as well – without you having to do anything other than publish it.

In the case of the Spirent and Canonical ebooks above (I can’t speak for the Xerox one) there was no special PR effort behind the scenes; the journalist in each case simply saw the ebook – perhaps via a social media post or marketing email – and decided to write about it.

In other words, not only do you get to promote your own content on your own site and channels, but other, independent, media channels may pick it up too (at zero cost to you) and bring it to their audience – who may well be the exact same audience you want to reach.

That’s more than just a double whammy for your piece of content. If it’s being covered as news by a reputable industry publication, that gives it a powerful independent endorsement. A trusted commentator has essentially said: this piece of content is worth your time.

What’s more, in all three of the cases mentioned above, the media story links to the landing page for the ebook in question, potentially driving a lot more traffic and downloads.

We know from Spirent that they saw a significant uptick in requests for the ebook as a result of the article in GPS World, demonstrating the power of independent coverage in a trusted industry publication.

How do you write content that gets media coverage?

So how do you go about creating content that intrinsically generates media attention?

That’s a pretty interesting question. Going on the evidence above, I could make some assumptions as follows:

I’m not going to suggest that an ebook is some kind of magic format that excites press interest, but it is certainly a format that’s long enough to say something meaty and interesting while being accessible enough not to be a slog to read. (Read our advice on how to write a decent B2B ebook.)

It’s unlikely that any trade publication is going to cover a puff piece that simply pushes a vendor’s products.

The thing that seemed to interest The VAR Guy about the Canonical ebook is its honesty: it admits that Ubuntu is not for everyone, and even goes so far as to mention competing products in a favourable light. In other words, it’s a practical piece that addresses the realities of modern enterprise computing, and is honest enough to admit that the vendor doesn’t actually have all the solutions.

It was this honesty that attracted the attention of this IT trade publication, but to my mind, that kind of pragmatic approach is essential to creating good content full stop. The more honest you are about the real world your buyers operate in, and about your place within it, the more you’ll be respected, trusted and listened to.

By contrast, steaming in with content that’s all about you and your products, and how they’re the answer to everything, is a sure way to get your ebook chucked in the recycle bin – by customers as well as journalists.

If I think back to the writing process for the Spirent and Canonical ebooks above, it strikes me that both of them were written as the result of a detailed briefing from people who knew what they were talking about, bolstered with relevant desk research to substantiate the points made.

Spirent is the market leading manufacturer of test equipment for anything that relies on GPS and other navigation satellites (including some of the navigation satellites themselves), and for their ebook I was briefed by a person who actually devises test scenarios and programs for unmanned aircraft.

For the Canonical piece, I had an in-depth face to face briefing from the people responsible for positioning Ubuntu as an enterprise operating system, who knew what they were up against in terms of convincing CIOs that this free software was a viable alternative to the likes of Windows.

As with any decent piece of content, the expert knowledge is the thing that makes these ebooks worth reading. The writer’s job is to extract that knowledge from the experts, substantiate it through additional research, and relay it in a way that makes the task of reading it as effortless and as engaging as possible.

Again, I’m not saying that producing an ebook that contains expert knowledge is a sure path to independent media coverage. I must have written 75-100 ebooks over the past four years, many of them with extensive input from clients’ subject matter experts as well as solid desk research, and only three of them have received media attention. But it’s fair to say that an ebook that lacks expert knowledge and convincing evidence is unlikely to make any kind of impact – with media *or* buyers.

I’m pretty sure that one of the main reasons GPS World covered Spirent’s ebook is that it’s on an incredibly hot, incredibly niche, topic – testing unmanned aircraft – around which there’s not currently an awful lot of expert guidance.

Demand for drones is growing so fast that manufacturers are struggling to design products that do what buyers want, while staying on the right side of safety regulations that are only just starting to be drawn up. Making sure the drones’ navigation systems work properly is an essential part of that.

It’s such a hot area that GPS World has an entire section devoted to UAV (unmanned aerial vehicle) navigation on its website; a section that it must fill with interesting, credible, reliable and useful information.

So when a reputable vendor comes along with a useful ebook that fits this exact topic, it’s something that could be considered pretty noteworthy for the publication’s audience.

Similarly, Contently had a choice of ebooks it could have linked to on the Xerox website. I’m just guessing, but I wonder if perhaps it chose the one it did because urban mobility (walkable / bikeable / liveable cities) is such a hot topic at the moment.

Don’t lose sight of what your content is really for

Getting independent press coverage is an interesting and potential very valuable outcome of any content creation effort. So should you try to develop content with media coverage in mind?

I’d say a resounding no. Your content should always be created to meet an informational need your customers and potential customers have, not to attract attention from the media.

But if you publish an in-depth, convincing, authoritative piece on a hot, niche topic that aligns with what the readers of a trade publication are interested in – and that piece addresses readers’ informational needs in an honest, helpful and unpartisan way – don’t be too surprised if it ends up being covered as news.

Have you ever had a piece of content covered as news? Let us know in the comments. 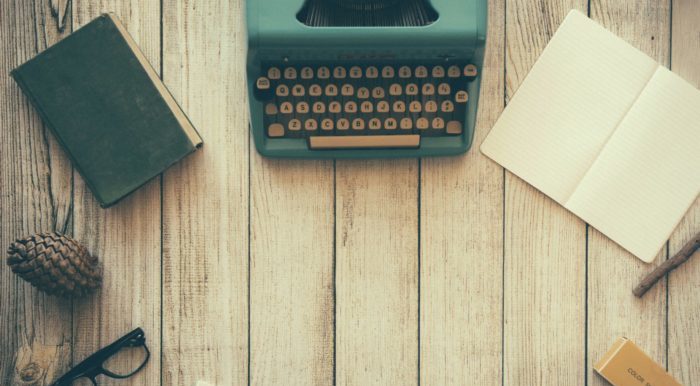 Find out why editorial boards are great for reliably producing the marketing content your business needs – and how to run one successfully.