There are things that comics can do that other types of content can’t. It’s a visual format that’s more narrative-focused than an infographic, so they’re great for storytelling. And as business illustrator Virpi Oinonen has previously explained on Content Marketing Institute:

“Comics can be used for almost any message, but they really come in to their own when used to explain abstract, complex, or “unsexy” ideas or products.”

All prose and no play

We first struck upon the idea of writing an ebook about how to use comics in B2B in 2013. We’d worked on a few single-page comics for clients, really enjoyed the process, and wanted to share our experience.

At that time, we were just envisaging a standard, copy-led PDF with limited design. I have a Word doc dated from 15 October 2013, where we started to plan and write the chapters for our short eBook. Fiona and I wrote two chapters, we had half-a-dozen comic panels explaining different elements of comics that would be set within a sea of prose…

And then 22 Panels Comic Art Show happened, the first convention of its kind to come to Cornwall. A keen comics reader, I delved into the convention, meeting with comic artists, writers and sellers. I left with a dozen comics and graphic novels I’d not read before. Reading through Fight the Power! A Visual History of Protest Among the English-Speaking Peoples it became clear that we could do this:

Radix could write and budget for a comic that explained a complex topic in a clear and considered way.

Bringing the team together

We agreed that that Fiona would write the script for the comic, I would edit the script and we would hire an illustrator to draw it digitally. Then, with the completed artwork to hand, I would letter the pages digitally. This all seems so simple, written here, but it was more complicated than that.

First: Fiona had written video and TV scripts, but never a comic script, so I’d have to coach her in how to write for it. Second: finding an artist or illustrator with comics experience is not easy. Sure, there are lots of artists out there who can draw a great looking character or an amazing front cover, but understanding how a single panel on a page is put together and having the discipline to leave room for dialogue and caption boxes: that takes knowledge and experience. 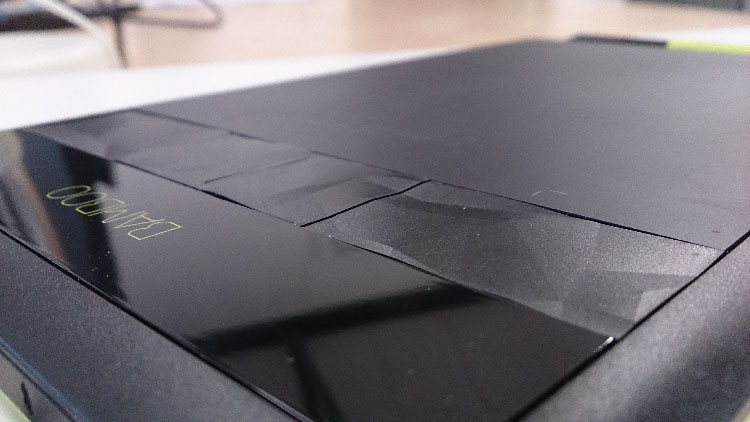 Over several months, we spoke with several artists and illustrators, but were unable to find the right fit. The script was almost finished and we needed to find someone soon if we were to publish in time to meet our July 2014 launch deadline.

And so I reached out to the connections I’d made at other comics conventions. Just as we were hitting April, we finally signed up comics artist and colourist Kirsty Swan, who works on comic books for the publishers like Dynamite (think Red Sonja and Green Hornet).

The mad dash before the calm

Planning for Kirsty to design and illustrate the comic over May, we still needed to finalise the script for the comic book. But first, Fiona and I had to realise that we should allow the art to convey as much of the information we wanted to get across as possible.

This meant, as we neared the final draft, that we needed to thin out the dialogue as much as possible. Writing dialogue in comics use to be like writing tweets for Twitter: you need to be economical with your words, but still be compelling. Where with a tweet you would be trying to get someone to retweet the message, click a link or reply, in a comic you’re constantly trying to compel people to keep reading and take in what’s being said. 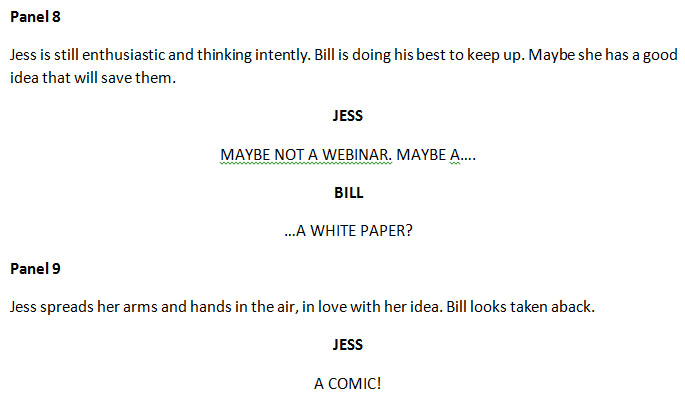 Sticking to the rule of no more than 25 words in a speech bubble, minimising the number of moments of dialogue that ran to such lengths and concentrating on showing rather than telling: we got a script to Kirsty in time for her to spend May illustrating it. During May, I attempted to create by comic book font to use in the lettering process.

May turned into June, it looked like we were going to have a not-so-British-summer, and Kirsty delivered the unlettered pages of the comic. While a cover was being worked on, I set about lettering the pages. Settling on a font (we didn’t use mine, because it didn’t suit the artwork style), I began adding in chapter headers, speech bubbles and captions.

Once all the pages were lettered up and proof-read for the 10 time, I assembled them in InDesign with the cover page and created the PDF of our comic book eBook. I was really worried that the comic would be huge, the InDesign file was over 500MB, but the finished PDF came in at a slim 16.9MB.

Having planned our distribution methods (the file would be hosted externally in the cloud and we’d use a cloud monitoring platform to check download levels), we wrote a landing page for it (something we’re very used to doing at Radix) and an accompanying blog post. Now all the pieces were in place, we made everything public and it’s now available directly as a PDF and on SlideShare.

What I learned from this project

When Fiona and I began creating this eBook, we didn’t know 100% what we were doing. There was a great deal that we learned along the way, from commissioning an artist, to perfecting dialogue, to creating our own font. It’s not been the simplest content journey, but it’s certainly been rewarding, especially with all the great feedback we’ve had for it (our comic eBook has a few fans).

We knew when we were starting down the path of making the eBook as a comic that we were doing something that not many have done in B2B before, but I learned that you shouldn’t be afraid to do something different.

If you’re keen to try incorporating comics into your content toolkit, I’d be very happy to talk through our experience and what we’ve learned – feel free to get in touch!

How to use comics in B2B content marketing (the ebook)

Writing comics for B2B marketing: 3 tips to stop you from drowning in words

Long vs short: how to write comics for B2B audiences

Back in 2014, one of the Radix team suggested we make a board game about the role of copy in content marketing. So we did. Steve relates the epic tale of how Funnel! was born.

The B2B tech content bubble is unsustainable - but it’s not because of “content shock”, shrinking attention spans, or any of the usual suspects, says Fiona.