The MacTaggart Lecture, the centrepiece of the annual Edinburgh International Television Festival,
is meant to be a clarion call to British TV executives – usually combining a rousing affirmation of television’s ineffable brilliance with dark warnings that the entire industry is about to collapse horribly about its own ears if it’s not careful.

It’s not meant to be a clarion call to B2B technology copywriters like me, whose closest brush to date with the TV industry was writing a half-baked sitcom script about three vets in Kentish Town.

But this year’s lecture, delivered by Google CEO Eric Schmidt on August 25th, struck a chord, and a painful and shameful one at that. Schmidt’s argument was that television and the internet are converging at a vertiginous pace, yet the UK is poised to miss out on the bonanza because the nation that invented both the television and the computer has lost its way in the world of technology.

“The UK has stopped nurturing its polymaths. There’s been a drift to the humanities; engineering and science aren’t championed. Even worse, both sides seem to denigrate each other. To use what I’m told is the local vernacular, you’re either a luvvy or a boffin.”

The UK, he implied, has too many luvvies and not enough boffins, and that’s because kids these days aren’t taught to write code.

“In the 1980s the BBC not only broadcast programming for kids about coding, it also shipped over a million BBC Micro computers into schools and home. I was flabbergasted to learn today that computer science isn’t even taught as standard in UK schools. Your IT curriculum focuses on teaching how to use software, but gives no insight into how it’s made. That is just throwing away your great computing heritage.”

Well, this provoked conflicting emotions. One the one hand, how dare this American parvenu come over here and tell our great proud nation that we’re a bunch of no-use Fotherington-Thomases, skipping about all “Hello trees, hello sky”, while the valuable work on building the future is being done by foreign eggheads with CompSci degrees.

On the other hand, he’s absolutely right. The UK isn’t fond of polymaths – any literary or dramatic work with a scientific bent is labelled ‘sci-fi’ and consigned to a niche channel or special bookshop section, where it can be safely consumed by dorks while the rest of the country tunes into Downton Abbey.

He’s right about the 80s, too. His lecture unearthed Proustian memories of the feel and smell of the Sinclair Spectrum’s rubber keys, of assiduously copying chunks of code out of Your Sinclair magazine, of learning BASIC at home and electronics at school. Until A-levels time came and I had to choose between maths and science or humanities, and the latter won.

But looking to kids to re-forge the link between the arts and engineering is a bit short-sighted. How about all of us late-thirtysomethings and early-fortysomethings who grew up learning BASIC but were later, for whatever reason, steered down another path? To paraphrase David Cameron, we were the future once. Maybe we can be the future again.

So that’s why I’m learning to program computers again. I’ve decided to start with Python, because of a passage in the young-adult novel ‘Little Brother’ by Cory Doctorow
(the sort of polymath whose novels get stashed away on ‘Sci-Fi’ shelves, out of sight of arts graduates) that’s worth quoting in full:

“You can learn to write simple code in an afternoon. Start with a language like Python, which was written to give non-programmers an easier way to make the machine dance to their tune. Even if you only write code for one day, one afternoon, you have to do it. Computers can control you or they can lighten your work – if you want to be in charge of your machines, you have to learn to write code.” 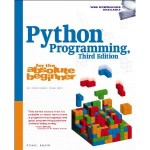 I’ve only been learning for a few days, using this book,
and so far I can only write the very simplest of programs. But I feel like I’m gaining new skills that I might be able to put to use on something practical in the not too distant future. And this new insight into how software works might help me to write better copy for Radix’s IT-industry clients.

Best of all, I might be able to teach my daughter how to code too – and maybe she’ll be part of a new generation of Victorian-style luvvy-boffins, ready to combine art and science in new and exciting ways. It seems like too good an opportunity to waste.

B2B blogging has had something of a renaissance lately. But it's a crowded market – so your blog needs to deliver real, clear value if it's going to stand out. Here’s how…

Kieran gets nostalgic for indoor gatherings, and waves you quietly into an imaginary lecture theatre, where he’s just beginning his class on B2B white papers….