Since partnering with Plant One last summer, we’ve pledged money for 223 trees to be planted  to help protect our local ecosystem here in Cornwall. But while we know funding trees is fantastic, we also wanted to get hands on, and actually plant them.

So for one windy day in December, a group of us swapped our keyboards for shovels and got involved at a Plant One event just across the river from our offices, at Tregew Barn in Flushing.

How to plant a tree

Eleven of us arrived at 9.30am to face a muddy field – I mean, this is Cornwall after all. But apparently not all of us had thought this far ahead. And so, wearing ten pairs of boots and one pair of converse, we made our way through the mud to a steep hill waiting to be filled with trees.

Before we could start planting, we needed a lesson in how actually to plant a tree. 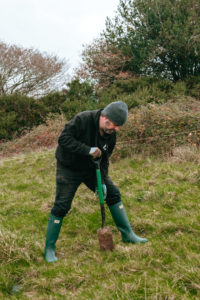 The planting process itself was definitely simpler than I was expecting. Make a slit in the ground with the shovel, put the sapling in, firm the soil, place a protective tube over it, and stake. But unsurprisingly it became less simple once we started. You’d think the wet ground would make it easier to dig. Nope.

The tricky part was finding a spot of ground soft enough to push the shovel in. It was tempting to just try to force it rather than searching for a more amenable spot but, after a couple of battles between shovel and ground and a slight bend forming in the metal, it was clear the shovel would usually lose.

Despite the hard ground, we soon found our rhythm and began to make steady progress. The site had been divided into three and soon enough we had finished the first third and were ready for a coffee break. By the time we had finished the second we were ready for lunch. Most of the volunteers were ready to call it a day at that point, too (and I don’t blame them.) But Team Radix ploughed on, determined to complete the site.

If you build it, they will come

This habitat – ancient woodland bordering the tidal river – is rare and vital for wildlife. The aim for the day’s work was increase the cover of woodland next to the river by a quarter. And together with employees from St Austell Printing Company and Scence Skincare, alongside 15 members of the public, we planted 497 trees over the course of the day.

No wonder our arms were still aching three days later.

To mimic the woodland that we were extending, we planted Cornish and English Oak, Holly, Elderberry, Hawthorn, and Rowan trees. And added Wild Cherry and Grey Willow to improve the biodiversity and resilience of the habitat.

Hopefully in 20 years’ time we’ll be able to go back and visit a growing woodland. The expert tree planters at Plant One checked our efforts, so there shouldn’t be too many casualties despite the Cornish weather.

What did we make of our first tree planting day

Personally, I can say that I really enjoyed taking a day out of the office to plant some trees and do some lasting good. I can’t wait to do it again once we’ve pledged even more trees to plant. But what did everyone else think?

Lisa says: “It was a really great day, not only being outdoors in the fresh air planting trees that will be there for future generations, but also to hang out with and have fun with the Radix team – many of whom I hadn’t seen in person since the start of the pandemic. It’s surprising how many trees you can plant in such a short amount of time too.”

“Tree planting wasn’t quite what I expected,” Ben P adds. “But then again, I rocked up in a tattered old pair of Converse and still managed to have a really good time. I recommend planting trees.”

And Jordan says: “It felt great to be active and outdoors and to feel like we were all contributing to a great cause. As someone who rarely gets into the office these days, it was brilliant to be involved in something like that with my friends and colleagues.”

And it’s not just Radix who had a great day, our fellow planters from other Cornish businesses did too.

Beth Mayman, Operations Manager at St Austel Printing Company, agrees: “Tree planting seems like such a simple thing to do, but to plant trees on this scale actually takes a huge amount of planning, with a good dose of expertise, energy and enthusiasm – which the Plant One team have in bucket loads! It was a rewarding day spent with a great bunch of people, coming together to make a difference. Count us in next time!”

So how many Radix employees does it take to plant a tree?

Apparently, five. (Plus another six to keep the photographer busy!) 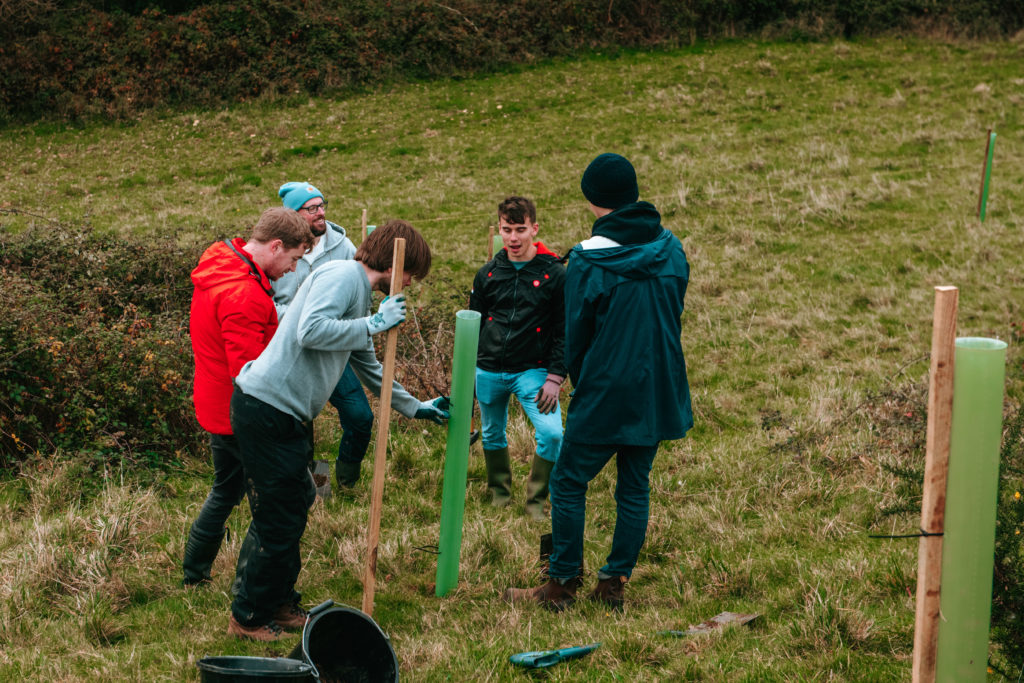 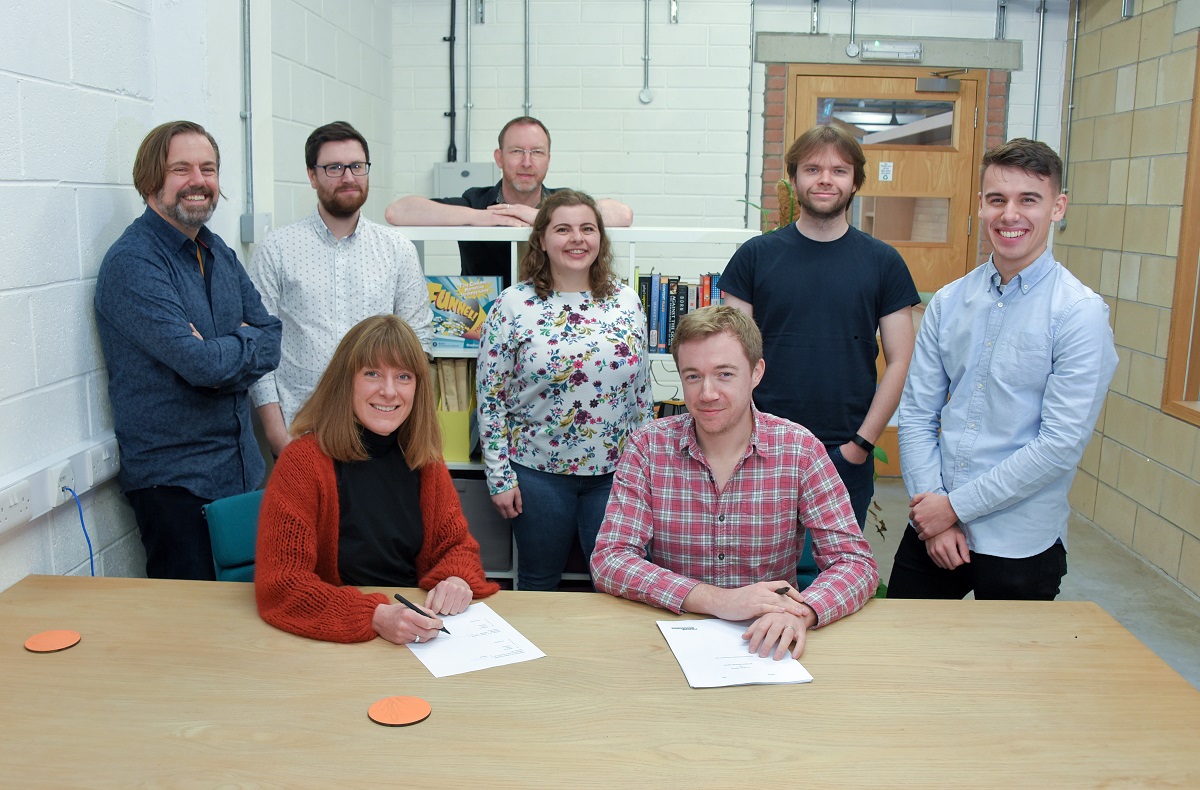 Radix employees have taken over the company

We're thrilled to tell you that Radix Communications is now 100% owned by its employees. Here's a bit about our Employee Ownership Trust (EOT). 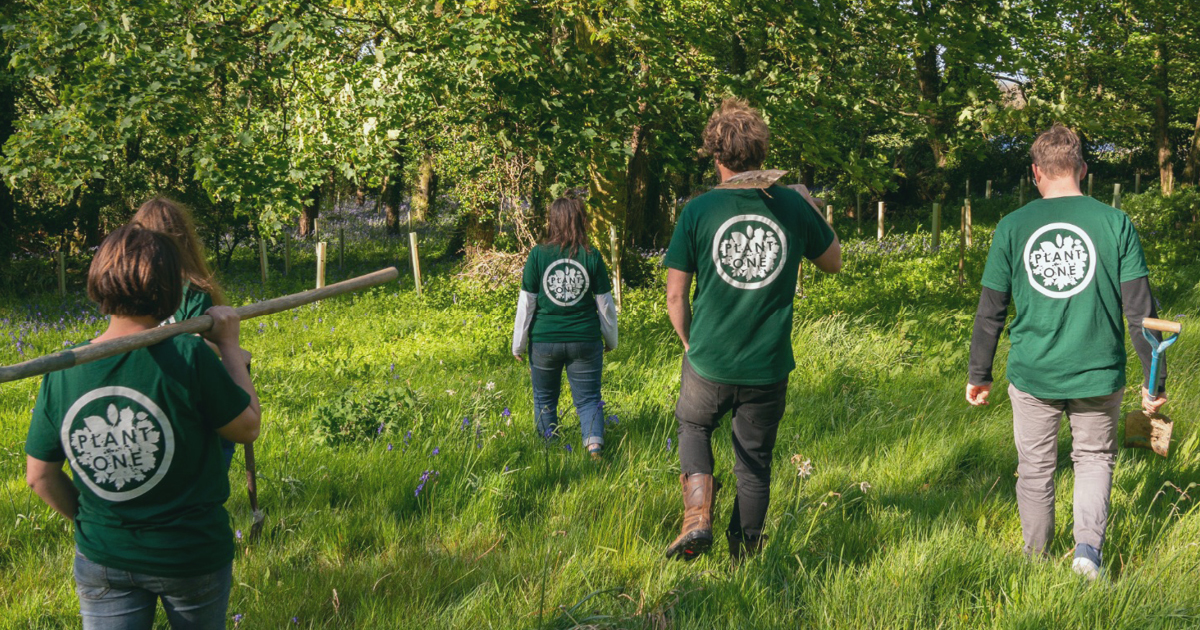 We’re a B2B copywriting agency. So why are we planting trees?

As a business, it's part of our mission to have a positive impact in the world. So we teamed up with Plant One to plant trees every time we reach a company goal. Here’s why it’s so important to us.