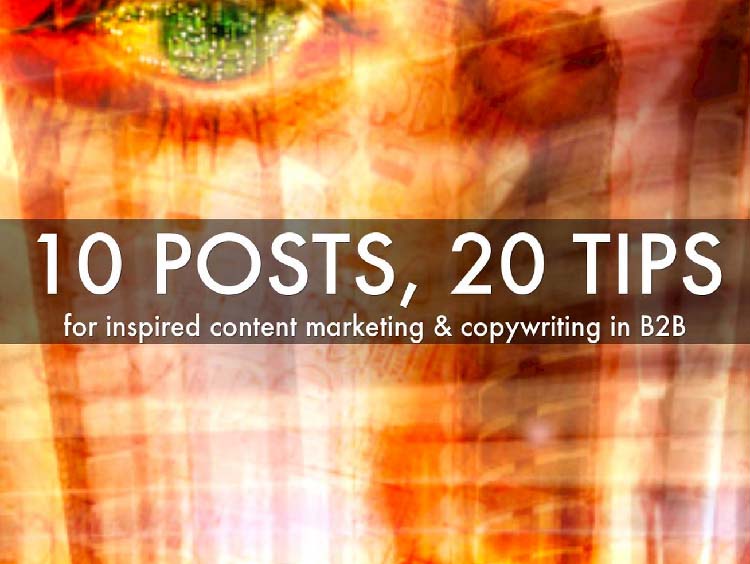 After looking at a presentation created in Haiku Deck by copywriter Dimitri Lambermont, which had then been exported to SlideShare, I decided to experiment with the deck builder.

Taking my theme as copywriting and content marketing, I worked on building a slide deck stuffed with inspirational quotes from blog posts and articles we’d recently read.

Haiku Deck is not about uploading something like a pre-existing PowerPoint or PDF document. Instead you combine words with images in the web app itself.

You can use your own images, but the service also offers a huge pool of CC licensed images. Cleverly, it can then pick suitable images out for you, based on the words you type onto a slide or search for directly. The resulting words-image combos can sometimes be a bit more metaphorical than you might intend, but so far I think it all looks kind of cool.

Though none of the slides I would eventually add to my deck would need bullet points or a numbered list, it is possible to have them.

It’s possible to export Haiku Decks as PDFs or PowerPoint/PPT files, but the PPT files do not have editable text and you can’t import PDFs or PPT into Haiku Deck. So you could edit a Haiku Deck to put your brand’s logo in the corner of each slide, but, annoyingly, you wouldn’t then be able to take this back into the platform.

Currently there are six themes that you can apply one at a time to the entire deck, which affects the overall appearance of the text as well as the effects applied to the images used. The text auto-sizes according to the amount of text on a slide, which isn’t great if you have some text that needs to be less prominent, like (in my slides) the source of a quote.

The platform is simple to use and, as Dimitri has shown, it’s possible to bring decks through into Slideshare. It’s also easy to share decks across social media and they can be embedded.

This is a third-party platform, however, so it would be wise to back-up decks that you create as either PDFs or PowerPoint presentations.

If you need to be in control of every niggling detail of your slide deck, then Haiku Deck is not for you. But if you want to put something like a “rant deck” together or one similar to mine, then I think it’s got potential. Just don’t expect to use it to show your latest quarterly results.

reddit v Quora: how can you use them in B2B marketing?

Scared of reddit? Unsure what to do with Quora? Emily looks at how both platforms can benefit B2B marketers (as long as you don’t put promotion first).

Blogs in, infographics out: 6 big content marketing trends we saw in 2015