Especially in B2B copy, an exclamation mark can make it look like you’re having to try hard to inject excitement – which automatically implies that you have nothing interesting to say.

They can undermine your authority, and make you seem needy – a simple full stop is almost always preferable. And as for multiple exclamations… oh dear.

But you’ve probably forgotten just how useful, versatile and just plain fun brackets can be. (After all, as grown-ups and B2B professionals in particular, we rarely use them.)

If you’ve never read William Goldman’s The Princess Bride (yes, it’s a book, not just a film), then do. Morgenstern was a master at this stuff.

BUT backets only have these powers because they’re relatively scarce. Over-use them, and you’ll kill them. So be careful.

(Bonus tip: you probably know this, but… if the bracketed section is part of a longer sentence, the end bracket goes inside the full stop. If it’s a self-contained sentence in its own right, it’s the full stop that goes inside – like this.)

The video says this (more or less):

I’m basically on a one-man mission against exclamation marks in business copywriting.

Sometimes they’re appropriate, but usually not. They just kind of make it sound like you’re trying too hard.

I remember saying to Mark that his brand is very smart and very professional – it’s about the personal trustworthy service that they give – and exclamation marks could undermine that.

(By the way, if you ever want an electric radiator — Mark’s your man.)

If you start saying: “It’s even got this! And it’s that!”

It’s really “We’re trying really hard to get you excited! Because what we’re saying is not exciting enough as it is!”

Now, there may be some brands that are all a bit wacky and stuff, and that’s fine… but brands that use too many exclamation marks just remind me of Timmy Mallett.

(Again, that’s a cultural reference is lost on half the people here. I’m sorry. But it is that “Wheee! I’m wacky, aren’t I?!”)

You can be pretty witty and excited without trying too hard to be “Hey kids! Are we having fun?”

Brackets. Not all the time — don’t go too crazy with the brackets — but the occasional bracket, it’s the kind of thing that you forget about because you don’t use them so much in grown up writing, generally speaking.

They don’t seem professional, but if the tone you’re after is slightly warm and slightly friendly, brackets can be great.

Also, they draw the eye. You forget that people usually read with their eyes, and you can help them — like dashes that just separate out the sentence — and brackets work like that.

And there’s that thing in movies or TV… that Frankie Howerd thing. A little aside to the camera.

So they’re doing the scene, but then they talk to the audience. Miranda does it as well. It’s “OK we’re doing this, but you and me we know this, right?”

Brackets are sometimes a really nice touch — but don’t go crazy with them. Don’t use them all the time, or they’ll lose their power (like antibiotics).

Check out the next video, and find out why it’s a good idea to avoid using the word “newsletter”. 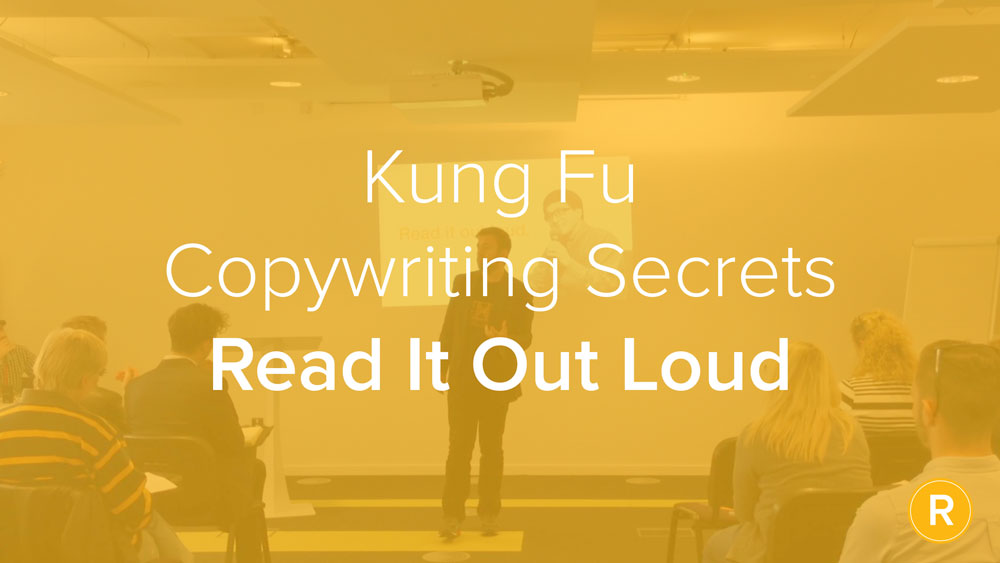 Kung Fu Secrets of B2B Copywriting: Read it Out Loud

If your copy feels wrong, and you don’t know why, reading will usually make the problem plain. This quick video explains why.