I’ve been asked to write a riposte to George’s beautiful post which, if you’ve yet to read it, argues that combining poetry with content marketing is about as smart as plunging an epic sword of lightning into a humdrum, B2B bathtub.

George suggests the ‘great poets of old’ wouldn’t be happy with poetry turning up in marketing communications, since, as a rule, they wouldn’t have approved of their pure and sacred form of expression being used to support a wider agenda – put simply, they’d have believed in art for art’s sake.

Before we go any further, let’s unsweep this sweeping generalisation.

The Roman epic poem The Aeneid was written by an archetypal ‘great poet of old’; Virgil (you know, not the one who piloted Thunderbird 2, the other one). It tells the story of a Trojan soldier’s adventures following the brutal, ugly fall of Troy (it seems things went downhill pretty fast after he resigned as the pilot of Stingray).

Like so much of the poetry that’s poured out of the human race since the dawn of communicative signs and vocalisations, The Aeneid wasn’t merely created to be a great work of art, or even to dazzle, engage and entertain.

Throughout his epic, Virgil is working to give an unstable Rome its own, rock-solid foundation myth, and to none-too-subtly shore up the current regime.

Book VI of the poem sees Virgil’s hero visit the underworld. While there, he’s shown a vision of Emperor Augustus – Rome’s reigning Emperor in Virgil’s own time. Our hero is told:

“This is the man, this is him, whom you so often hear

promised you, Augustus Caesar, son of the Deified,

who will make a Golden Age again in the fields

where Saturn once reigned…”

What’s Virgil doing with these lines? He’s using his poetry, like many have since, to carry an agenda, and sell a brand – namely Rome, and its current administration.

Whether we like it or not, the poetic arts have long since been used to sell. And they’re still being used for that purpose today, not so much in the service of Rome (though I’m sure there’s someone out there writing persuasive CTAs for the city tourist board) but in the service of modern centres of power, such as, you know, multinational, B2B corporations.

Poetry, you see, isn’t all about sonnets and villanelles. Many of the techniques we think of as characterising poetry are constantly at play in the very best marketing content.

Let’s take a closer look at the first.

Here again I have to disagree with my esteemed colleague – just because you’ve folded a big or complex idea into a small, simple space, it doesn’t mean the reader’s going to struggle to get it out again.*

Witness one of the world’s most famous short, short stories:

Or, if you’d rather have an explicitly poetic example, how about this:

It’s not quite cold enough

to go borrow some firewood

Hemingway and Brautigan convey complete, miniature tragedies in 6 and 15 words respectively. This essentially poetic technique of getting words to punch above—or below, or even around—their weight is exactly what effective email subject lines, corporate tweets or brand taglines must do.

Here are two examples of the latter:

Where do you want to go today?

Here Microsoft attempts to crowbar an infinite number of personal dreams into a mere seven words, while tacitly promising to make them all come true.

I’d argue we sense the presence of all these ideas in the moment it takes to read Cisco’s line, even if we’d be hard pressed to quickly distinguish and articulate them.

Let’s turn to the second technique.

Great print and online adverts rely on a neat marriage of copy and design. 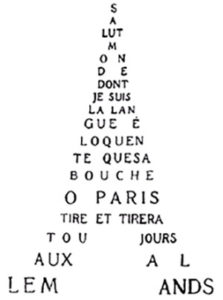 (By Guillaume Apollinaire (Own work) [Public domain], via Wikimedia Commons)

The word ‘poetry’ encompasses an incredible variety of forms and techniques, at least two of which, as we’ve seen, are rife in the world or B2B marketing. I suspect, if this blog post hadn’t already turned into a miniature essay, I could find us a few more.

What would be more exciting, however, would be to look for the techniques that aren’t such staples of B2B marketing content – found poetry, chain poetry, performance poetry… – and see how they could be exploited to serve The Man put to new, inspiring use.

Want some creative in your copy?

If you need a writer to deliver copy that inspires and generates action – contact us today.

*And, though I’ve no time to do so here, I’d argue that asking the reader to put in a little effort isn’t always such a bad thing. I love this poem by e.e. cummings for how much it asks of the reader, and the moment of stillness it quite literally physically creates.

Does jargon kill B2B copy – or does it bring it to life?

Marketers are told to rid their copy of jargon, but is that always a good idea? Matt looks at why jargon has an important role in B2B copy – and how you can use it effectively. 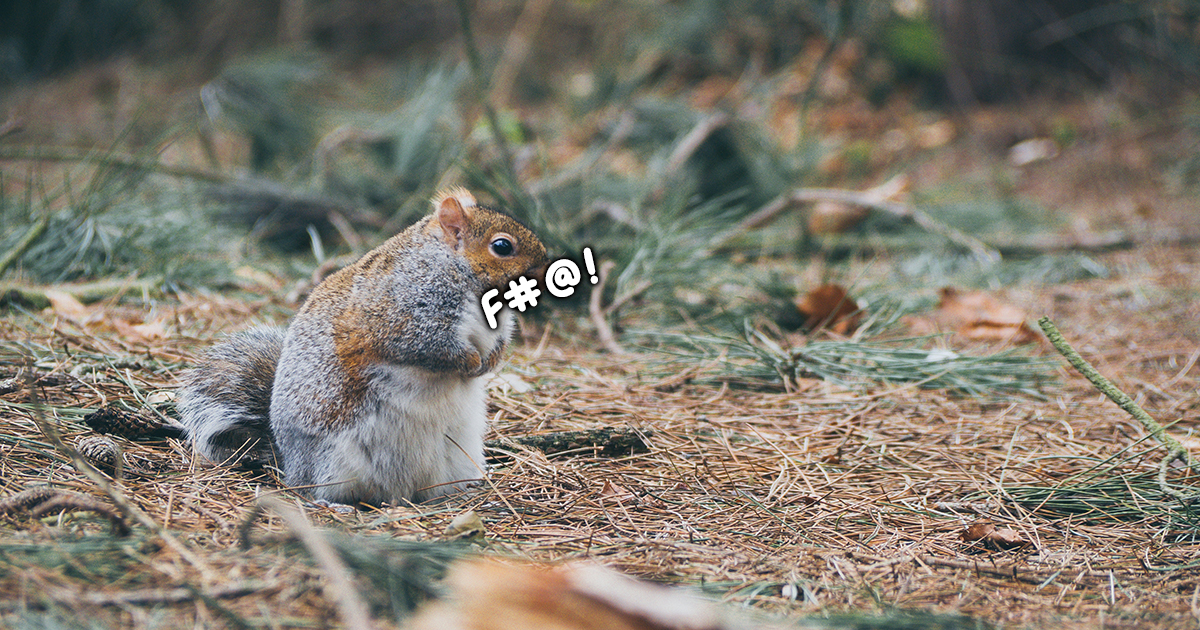 Swearing in B2B copy: f**k yeah, or goodness gracious no!

B2B is moving towards more emotive, powerful and concise messaging, but is it possible for it to be too edgy? Could hard-hitting language put off audiences?